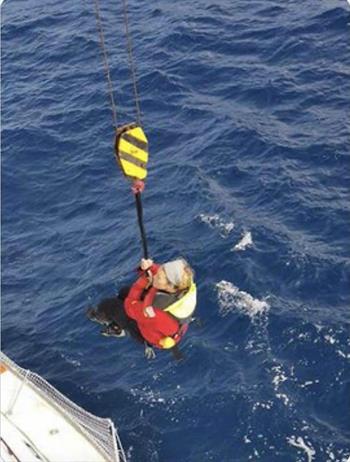 The first news that she was safe onboard came with a text message:

The ship is now bound for Punta Arenas, Chile and expected to reach port on 14th December.

Goodall (29) from Falmouth UK was the sole women and youngest skipper competing in the Golden Globe solo non-stop round the world race, which started from La Sables d’Olonne, France on July 1st. One of 17 starters, she was lying in 4th place and challenging for a podium finish when her 36ft yacht was pitch poled and dismasted during a ferocious storm. Sheltering below at the time, she was thrown across the cabin and knocked unconscious. Only when she came to, did she fully realise the situation. Her boat, a rugged Rustler 36 production yacht heavily modified for the Race, was wrecked and inside flooded and totally trashed with the contents of lockers and draws strewn across the cabin. On deck, DHL Starlight’s rig and two spinnaker poles that she had planned to utilise as a jury rig in the event of a dismasting, had been swept away.

The first the world knew of her situation was at 10:30 UTC Wednesday 5th December when HM Coastguard’s MCC (Mission Control Centre) in Fareham UK picked up an EPIRB distress alert from the yacht, starting a tense 50 hour international rescue operation involving British and Chilean rescue authorities and an all-ships alert.

Goodall’s nearest competitor, Estonian sailor Uku Randmaa sailing an identical yacht to DHL Starlight was 400 miles ahead and about to face the same storm, so could not turn back. American/Hungarian sailor Istvan Kopar was 780 miles behind and not expected to reach Susie’s position for another 6 days.

Goodall’s first broadcast via satellite phone to Don McIntyre, the GGR Race Chairman was charged with emotion but it was clear that this vastly experienced sailor was in control of the situation. She reported “I have been dismasted. Thought I had holed the hull because the boat filled with water, but the hull is NOT holed. The hull is OK.

The boat is destroyed. I can’t make up a jury rig. The only thing left is the hull and deck which remain intact. We were pitchpoled [rolled end over end] and I was thrown across the cabin and knocked out for a while. ”

She also confirmed that she had secured all hatches, portholes and safety equipment, and did NOT need immediate assistance. She said that before the incident, she had been enjoying the conditions and felt in control. But then the safety tube on her Monitor windvane self-steering broke and she was forced to trail a drogue anchor astern and take down the mainsail. She was below decks when the boat was pitchpoled, and when she returned on deck to assess the damage, found that the line attached to the drogue had parted.

Susie also reported that she ‘has been beaten up and badly bruised’ with cuts and scratches and a big bump on her head. MSOS, the GGR’s 24 hour medical tele-centre was advised and doctors provided direct medical advice and monitored her symptoms.

By now conditions had begun to improve as the storm continued its easterly course, and buoyed by the news, Goodall’s sense of humour returned

She worked to get the flooded engine to start and prepared herself to be taken off the yacht. The plan was for her to motor DHL Starlight up against the lee side of the ship grab the hook from a deck crane and get lifted up by her life harness. But the first attempt failed when her engine stopped just as she was about to manoeuvre her boat into position. Exact details of the evacuation remain sketchy, but news that the 50 hour intense vigil had come to a safe conclusion came with the a text message:

07 Dec 15:14 UTC: ON THE SHIP!!! followed by a photograph of her being hoisted aboard the ship on the end of the crane.

The MV Tian Fu is now continuing its voyage but making a transit stop off Punta Arenas, Chile on December 14 where Susie will be transferred ashore to be met on the dockside by The British Consul John Rees.

After the rescue, Don McIntyre, the GGR Race Chairman said: “While that first phone call from UK Coastguard came as a shock, it is great to now look back at a very professional operation by an international team led by MRCC CHILE and the Master and crew of the TIAN FU ending with a successful outcome, Susie Goodall safely winched aboard ship. We will always be grateful for the efforts of all in this challenging situation.”

Ian Guy, Duty Controller for the UK Maritime & Coastguard Agency added: “This was a very demanding long range rescue which was made even more complex because it was taking place 2,000nm off Cape Horn. During this period, Susie was at the mercy of 7m seas and severe weather and it’s a credit to her that she remained in good spirits during this tense wait. Whilst this was happening, HM Coastguard remained in continuous contact with MRCC Chile and Golden Globe Race HQ.

“In this weather and at this range, it was vital that we provided as much assistance as possible to the lead agency MRCC Chile, and we maintained a watchful eye over the situation for updates via satellite phone. Our priority is to protect life at sea and we will always do everything possible to provide assistance for a mariner in need. In the event we can’t get there ourselves, we do our best to identify someone who can which is exactly what we did in this case. Although this must have been harrowing for Susie, this is a superb example of international co-operation and we would like to thank Golden Globe Race HQ, MRCC Chile, MV Tian Fu, MV Talimen, and all those who have played their part in bringing this rescue to a textbook and safe conclusion.”

A personal view about the inspirational ethos of adventure by Golden Globe Race Founder, Don McIntyre.

The latest rescue of British yachtswoman Susie Goodall from her dismasted yacht DHL Starlight after being pitch poled during a storm some 2,000 miles west of Cape Horn earlier this week has led some to wonder if the event safe? Should the Golden Globe Race be stopped after five boats dismasted and three rescues?

This forgoes the simplest fact that the master of any vessel at any time can return to any port and give up on any voyage. HE/SHE CONTROLS THEIR OWN DESTINY. Whatever the organizers of the Golden Globe should do, I can assure you that it will not impact on any sailors currently at sea. They would carry on. They love it. Without exception, every GGR skipper is a very experienced mariner aboard a well-prepared yacht who volunteered for this challenge with spirit and enthusiasm.

They are not there for the money, nor the fame. They are there to challenge themselves and seek adventure. Adventure has risk and has by its very nature an unknown outcome. Without Adventure, or those who are prepared to push themselves, the world is worse off. The issue is one of responsible adventure and the 2018 Golden Globe Races is very definitely just that.

Consider Susie Goodall. She is a highly qualified professional skipper with vast ocean experience. She is sailing a yacht built and prepared by a boat builder considered one of the best in the World. Her mast and rigging were designed and built by one of the biggest and best in the world, with full understanding of the challenges and expectation of knockdowns and rollovers. This is part of the reality. Susie’s safety gear, training and risk minimization process carried out under the GGR Notice of Race is exceptional and to the highest standard. The French Maritime Administration even declared that the GGR Notice of Race was THE BEST they have seen for ANY yachting event in all of France.

The challenge is very simple and pure. To sail solo around the world in a small seaworthy boat. People have been doing it for over 50 years. Young and old like David Dix, Jon Saunders, Jesse Martin, Jessica Watson, Vito Dumas, Minoru Saito, Kay Cottee, and of course, Sir Robin Knox Johnston, the first to complete a solo non-stop circumnavigation 50 years ago.

Ordinary sailors around the world with ordinary boats who sail oceans for the very same reasons, are watching, listening and learning from the GGR like it has never been done before. So too are future entrants in the 2022 Golden Globe Race, and there are many! So too are the organizers of the Golden Globe.

Sir Robin Knox Johnston is currently undertaking a comprehensive investigation into all issues surrounding the storm tactics of GGR entrants, rig designs and the events that have led to dismasting’s and three rescues in the Race. This very thorough report is widely anticipated and will be released at the conclusion of the Golden Globe Race.

As Founder of the GGR, I too am surprised at the outcome of some of these storms and dismasting that have resulted. It is an incredible challenge. Some may ask what is the point of continuing? The answer is very simple. No one should ever and can never kill off the human Spirit of Adventure. Adventure is inherent in our makeup. How often do you see the word ADVENTURE on TV, the side of a bus, and advertising billboards? Adventure is the very essence of a full life.

There may be some who do not understand the ethos, or the facts behind this amazing cultural renascence in sailing that is the Golden Globe. Some may say it is unsafe because these GGR skippers are not competing in fast foiling 60ft yachts and multihulls. You need only look at the results of the recent Route du Rum solo transatlantic race where 35% of the fleet was knocked out after just one storm to see that they are missing the point. Modern designs, latest composite construction, and satellite technology did not stop these boats from breaking up, being dismasted or being rescued.

There is nothing wrong with slower well-found yachts, traditional navigation techniques and high safety standards that ARE the Golden Globe Race.

The GGR is real life with real sailors in real boats. Boats, masts, sailors have been lost in all around the world races including the Volvo, Vendee Globe, Clipper, Whitbread and BOC Challenge races. These events are all adventures with young and old, men and women living their dreams that inspire others to follow in their wake. By any definition, the Golden Globe is tough, if not the TOUGHEST of them all.

Whilst we are all saddened by Susie having to abandon her boat and her ambition, and very appreciative and humbled by the efforts that many people, agencies and companies are making to bring her safely home, the GGR will continue. The support from ordinary sailors around the world is HUGE, passionate and growing every day! It is still a long way to the finish. Anything can happen. Only one boat finished in the first Sunday Times Golden Globe race 50 years ago. That is what adventure is all about. The 2018 Golden Globe Race is a very responsible one. The 2022 edition will be even more so.

This Article was originally sourced from Sail World and can be directly viewed here.