Home Gear AIS Apps: the pros and the cons 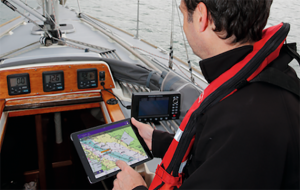 There are many marine navigation apps available for both Android and Apple tablets and phones that offer a wide range of navigational features, but too often AIS isn’t one of them.

The budget apps will often just give you a low-resolution chart, whereas the more expensive ones will provide (or work with) decent, zoomable, hi-res charts from an approved source.

Most tablets have a GPS function, allowing the app to plot your current position and direction of travel and speed over the ground (SOG).

You need to be aware that not all ‘location’ services found on tablets and smartphones actually incorporate a GPS receiver. Many of them get the position from triangulation on phone masts.

If your tablet doesn’t have an integral GPS receiver then you can often overcome this by using a Bluetooth GPS such as the Bad Elf or the Dual XGPS150A.

One thing all tablets lack is a communication port and yet being able to import your own boat’s instrument data into the app can make them considerably more detailed, accurate and useful.

For your tablet or phone to pick up this data, it needs to be broadcast initially over a Wi-Fi-enabled, multiplexer/router, of which there are quite a few (Digital Yacht’s WLN10 or Comar’s I300W, for instance).

Even better, Quark Electronics produces a combined GPS/AIS black box receiver (QK-A026) that has a built-in NMEA-0183/2000 multiplexer and Wi-Fi bridge – all for under £100.

One slight irritation when using any of these devices, however, is that they utilise a TCP/IP Wi-Fi connection, so you lose access to the internet once you’ve selected the router.

Confusion often arises when discussing AIS apps, usually due to the difference between an online AIS repeater service – Vessel Finder, Boat Finder, or Marine Traffic for example – and navigation apps that are capable of importing real-time AIS data from your vessel’s own AIS receiver.

Online versions are usually land-based and collect AIS data from various VHF masts around the coastline using the same method as a normal ship’s receiver.

Users of Marine Traffic’s mAIS app, however, can even use a smartphone or tablet to ‘self-report’ their position and status by programming a GPS-enabled mobile device to automatically report its position, vessel details and status directly to the MT network via SMS.

Either way, this information is then fed into a database and retransmitted to users via the Internet.

While this can sometimes be useful when you’re simply interested to see where a vessel currently is, it isn’t a collision-avoidance device and should never be relied upon as such.

During extensive trials of these apps it has been found that a vessel’s AIS signals can either sporadically disappear from the display when refreshed or appear in a different position to where they actually are (as confirmed by a pukka marine AIS receiver).

This can be due to a variety of reasons, none of which are possible for the tablet user to overcome or correct.

So if you are going to be using your device for real-world collision avoidance, you’ll need to pick an app that you can connect to your AIS receiver via Wi-Fi.

The post AIS Apps: the pros and the cons appeared first on Yachting Monthly.